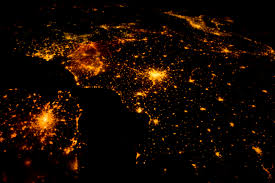 The clouds tickled the boy’s feet as he let them dangle over the land’s edge, like rolling waves in an ocean of white smoke. Not that he knew what an ocean was. To him it only ever appeared to be an expansive sheet of silky blue fluttering in the wind so very far below.

The boy peered downward as his legs hung precariously over the edge of the island that floated in the sky. The sun had set and, as he did many nights, he snuck out in secret in spite of the village taboo that forbid going near the island’s edge. He looked down at the stars strewn amongst the many spires that stuck out from the ground. These stars struggled to outshine each another, some lights danced about whilst others hovered in place. Some chose to shine a different colour: red, blue, yellow, white, and then there were those indecisive ones that changed with each passing moment.

None of the villagers knew what the world was like down below; it was not the kind of journey that let anyone bring back souvenirs or stories. This island in the sky was all its people knew and this, for most of them, was enough.

But there were those who could not ignore this vast world of unknown, who felt the sting of a curiosity that burned to know what was down there, perhaps more so than to know what was above, for the movement of the starry sky below had a life to it that was lost in the one above.

The boy laid himself flat on the rocky edge and stared upward at the other sea of stars that dotted the black canvas of the heavenward abyss. These stars seemed to stand there, burning with a dead consistency.

Stuck between two worlds of mystery, the edge of this lonely rock in the sky was a place of torment for the boy, though one he willingly sought.

There he sat and often thought. He could never know the sky’s sky, not without wings; neither could he know the jungles of stone below, not without the anchor of oblivion. Of course, it has always been easier to fall than to fly. Perhaps this was why the boy would frequently venture to the edge of the land: to gaze down from the verge of knowing. Sometimes he wished to push off from all he already knew and take the plunge, to extinguish the flames of desire that had licked at his soul for so long. Every time, however, he thought better of it.

Yet he could not shake the wonder, each time he sat at this very perch like a broken bird, of a world of possibilities that existed below. Over time he found that his seat at the edge grew shorter as he inched out further and closer to the stars he longed to touch. It was tonight that he realized he could go no further as he found himself half-sitting in the night sky.

The night always had this effect on his curiosity, as well as his desire to experience those lands that the others were determined not to discuss. It was a forbidden knowledge that toyed with him and provoked in him an appetite that his imagination alone could not feed; he only grew hungrier each time it tried. He knew that he would never know himself until he knew the world he lived in, that he could only know himself truly if he knew but something of the stone jungle below that became a fiery ocean every night.

These earthly stars mesmerized him, seeming closer than ever as almost against his will, or perhaps bending to it, he felt his grip loosen slightly as a gentle gale nudged at his back.